Home The Secret Doctrine Cosmogenesis in a Nutshell

Cosmogenesis in a Nutshell

From the Unknown One, the Infinite TOTALITY, the manifested ONE, or the periodical, Manvantaric Deity, emanates; and this is the Universal Mind, which, separated from its Fountain-Source, is the Demiurgos or the creative Logos of the Western Kabalists, and the four-faced Brahmâ of the Hindu religion. In its totality, viewed from the standpoint of manifested Divine Thought in the esoteric doctrine, it represents the Hosts of the higher creative Dhyan Chohans. Simultaneously with the evolution of the Universal Mind, the concealed Wisdom of Adi-Buddha—the One Supreme and eternal—manifests itself as Avalôkitêshwara (or manifested Iswara), which is the Osiris of the Egyptians, the Ahura-Mazda of the Zoroastrians, the Heavenly Man of the Hermetic philosopher, the Logos of the Platonists, and the Atman of the Vedantins. By the action of the manifested Wisdom, or Mahat, represented by these innumerable centres of spiritual Energy in the Kosmos, the reflection of the Universal Mind, which is Cosmic Ideation and the intellectual Force accompanying such ideation, becomes objectively the Fohat of the Buddhist esoteric philosopher. Fohat, running along the seven principles of AKASA, acts upon manifested substance or the One Element, as declared above, and by differentiating it into various centres of Energy, sets in motion the law of Cosmic Evolution, which, in obedience to the Ideation of the Universal Mind, brings into existence all the various states of being in the manifested Solar System. (SD I:110)

Manvantaric impulse commences with the re-awakening of Cosmic Ideation (the “Universal Mind”) concurrently with, and parallel to the primary emergence of Cosmic Substance―the latter being the manvantaric vehicle of the former―from its undifferentiated pralayic state. Then, absolute wisdom mirrors itself in its Ideation; which, by a transcendental process, superior to and incomprehensible by human Consciousness, results in Cosmic Energy (Fohat). Thrilling through the bosom of inert Substance, Fohat impels it to activity, and guides its primary differentiations on all the Seven planes of Cosmic Consciousness. There are thus Seven Protyles (as they are now called), while Aryan antiquity called them the Seven Prakriti, or Natures, serving, severally, as the relatively homogeneous basis, which in the course of the increasing heterogeneity (in the evolution of the Universe) differentiate into the marvellous complexity presented by phenomena on the planes of perception. (SD I:328) 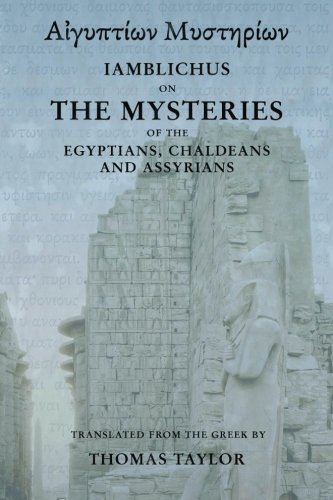 Iamblichus on the Mysteries of the Egyptians, Chaldeans, and Assyrians