Home Jewels in the Lotus The Self-Governed Sage

“A man is said to be confirmed in spiritual knowledge when he forsaketh every desire which entereth into his heart, and of himself is happy and content in the Self through the Self.  His mind is undisturbed in adversity; he is happy and contented in prosperity, and he is a stranger to anxiety, fear and anger.  Such a man is called a Muni.  When in every condition he receives each event, whether favorable or unfavorable, with an equal mind which neither likes nor dislikes, his wisdom is established, and having met good or evil,  neither rejoiceth at the one nor is cast down by the other.  He is confirmed in spiritual knowledge, when , like the tortoise, he can draw in all his senses and restrain them from their wonted purposes.  The hungry man loseth sight of every other object but the gratification of his appetite, and when he is become acquainted with the Supreme, he loseth all taste for objects of whatever kind.  The tumultuous senses and organs hurry away by force the heart even of the wise man who striveth after perfection.  Let a man, restraining all these, remain in devotion at rest in me, his true self; for he who hath his senses and organs in control possesses spiritual knowledge.”

“But he who, free from attachment or repulsion for objects, experienceth them through the senses and organs, with his heart obedient to his will, attains to tranquility of thought.  And hit tranquil state attained, therefrom shall soon result a separation from all troubles; and his mind being thus at ease, fixed upon one object, it embraceth wisdom from all sides. The man whose heart and mind are not at rest is without wisdom or the power of contemplation; who doth not practice reflection, hath no calm; and how can a man without calm obtain happiness?  The uncontrolled heart, following the dictates of the moving passions, snatcheth away his spiritual knowledge, as the storm the bark upon the raging ocean.  Therefore, O great armed one, he is possessed of spiritual knowledge whose senses are withheld from objects of sense.  What is night to those who are unenlightened is as day to his gaze; what seems as day is known to him as night, the night of ignorance.  Such is the self governed Sage!”

“The man whose desires enter his heart. as waters run into the unswelling passive ocean, which, though ever full, yet does not quit its bed, obtaineth happiness; not he who lusteth in his lusts.”

“The man who, having abandoned all desires, acts without covetousness, selfishness, or pride, deeming himself neither actor nor possessor, attains to rest.  This O son of Pritha, is dependence upon the Supreme Spirit, and he who possesseth it goeth no more astray; having obtained it, if there in established at the hour of death, he passeth on to Nirvana in the Supreme.” 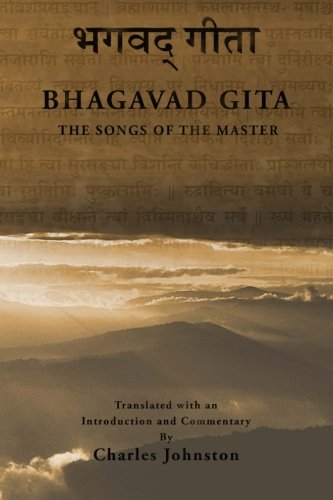