Home Articles Articles by Charles Johnston The Antiquity of India

The Antiquity of India

The Antiquity of India

In previous articles on Primeval Man,1 we have tried to outline and develop a view of the unfolding of history, in the light of our present knowledge of man’s enormous antiquity. The great law of Continuity—which all recent scientific knowledge and philosophic thought have united to establish and enthrone above every minor by-way of cosmic working—emphatically demanded our adherence to the belief that the development of humanity, throughout enormous ages, comparable in vastness and import to the geologic periods, must have been broadly uniform, and that the total wealth of humanity today, in power, knowledge, moral and spiritual force, must have been broadly the same, five thousand, ten thousand, or even a hundred thousand years ago. We have tried also to show that within the lines of this broad uniform development through enormous ages, a subsidiary law is at work by no means warring with the law of Continuity, but rather embodying it, and giving it effect. In accordance with this cyclic law, the development of humanity proceeded not in a straight line but by a vast series of wave-like advances, which thus harmonize the working of the forces of humanity with the other great cosmic forces of light, or sound or gravity, and so bear testimony to a uniform process of wave-advance throughout the whole cosmos. While we recognized in the later waves of the rhythmic development of races such high crests as our own civilization, and the civilization of medieval Europe—Venice, Florence and Byzantium; of Greece and Rome, of the Aztecs, Toltecs and Peruvians—we saw the earlier wave-crests rising, in ancient China, in Assyria and Egypt and India, and the older American civilizations, and we were gradually led to believe that still earlier waves may be represented in now fallen races like the Negro, the Carib and the flat-headed aborigines of Australia. Two conclusions may be drawn from this: that in this graded unfolding of humanity all parts were essential to the great design of perfection; that in each wave-crest was the opening flower of some new faculty, some hitherto untried power, which for the first time came into being. And as all faculties are necessary to perfection, we cannot say that the fruitage of any one wave-crest in the long procession of humanity is essentially superior to any other, though all are different as each is partial and has only turned to the light one facet of the gem which will be perfected humanity.

It must be admitted that if this view of man’s slow unfolding be just and true, our own material civilization, with its mastery over Nature’s external powers, is in no way more important to the total wealth of human life than the civilization of Greece, with its matchless sense of beauty, or the civilization of old Egypt, with its grand enunciation of the stately dignity and seriousness of life, or the civilization of antique India, with its single-hearted devotion to the inward powers of the soul, and its unequalled appreciation of the unswerving rectitude of moral law. If there be any purpose at all in the unfolding of human history; if there be any meaning in this grand advance of rhythmic waves, each one bearing on its crest some new promise of perfection, we must admit that we are as closely concerned in the meaning of Egypt and Greece and ancient India as in the meaning of the material civilization of today.

Thereby is restored to the study of man something of the dignity and profound importance which a flippant materialism would rob it of for the knowledge of ancient India is really the concern, not only of the pedant and the philologist, and the seekers after curious information, but of everyone who prizes the rounded development of humanity, and holds dear the total perfection of man. The recognition that ancient India’s unique devotion to the inward powers of the soul, and unparalleled appreciation of the unswerving rectitude of the moral law, really marked a high tide in human life will give to the study of old India a new and serious meaning, and tinge it with something of that almost religious enthusiasm without which no real work is possible, and no noble endeavour can have life. Signs are not wanting to show that this truer valuation of ancient India’s meaning, with its unique devotion to the inward powers of the soul, embodied in the Upanishads and the Vedanta, and its profound appreciation of the unswerving rectitude of moral law, most adequately expressed in the religion of Buddha, is beginning to pierce through and shine beyond the circle of professional scholars and to find some echo in the minds of all who think most deeply and most wisely. We may dimly foresee, even now, that in its ultimate result, this wider and deeper renaissance of Indian studies may not fall short of the achievement of the Hellenic Revival of Learning in the Middle Ages, with its love of the outward beauty of nature, but may rather excel it, in bringing a new value and meaning to life. On a future occasion we may follow up and examine each of the two branches of India’s message, the devotion to the inward powers of the soul in the Upanishads and Vedanta, and the profound appreciation of the unswerving rectitude of moral law. Meanwhile, the new earnest spirit which is infusing itself into Oriental studies, and especially into the study of the twofold method and secret of India may be illustrated.

The first illustration is from a work of Professor Max Müller—his last word, as he says himself, on the deepest problems which can concern the intellect of man with the title “Theosophy, or Psychological Religion,” the very heart of which is the devotion to the inward powers of the soul embodied in the Upanishads and Vedanta. Professor Max Müller writes:—

“What we can study nowhere but in India is the all absorbing influence which religion and philosophy may exercise on the human mind. So far as we can judge, a large clan of people in India, not only the priestly class, but the nobility also, not only men, but women also, never looked upon their life on earth as something real. What was real to them was the invisible, the life to come. What formed the theme of their conversations, what formed the subject of their meditations, was the real that alone lent some kind of reality to this unreal phenomenal world. Whoever was supposed to have caught a new ray of truth was visited by young and old, was honoured by Princes and Kings, nay, was looked upon as holding a position far above that of Kings and Princes. That is the side of the life of ancient India which deserves our study, because there has been nothing like it in the whole world, not even in Greece or in Palestine. . . . Was it so very unnatural in them, endowed as they were with a transcendent intellect, to look upon this life, not as an arena for gladiatorial strife, or as a market for cheating and huckstering, but as a resting place, a mere waiting room at a station on a journey from the known to the unknown, but exciting for that very reason their utmost curiosity as to whence they came and whither they were going?”

This feeling of the deep human importance of Oriental studies, which almost turns the professorial chair into a pulpit of religious propaganda, is as strikingly manifested in a recent letter from M. Leon De Rosny, the greatest of French Orientalists, who is chiefly concerned with the religion of Buddha. M. De Rosny writes:

“For the last few years, the critical spirit of Europe has been studying the Buddhist philosophy, and I have founded a large school, which comprises disciples in many lands, who have undertaken the mission of establishing on a solid basis the science of destiny, or in other terms, the science that M. Berthelot calls the Ideal Science. I have a powerful enemy to struggle against, one that I will struggle against to the last day of my life, namely the indifferentism of those that wilfully ignore the possibility of Science, and that are considered by Buddhism as criminal as the assassin. Science and Love are the essential factors of Buddhism, but must not be considered as one and the same thing. The legend of the Bodhisattva, which represents the early Buddhism, furnished a most touching example. The Buddha, before arriving at the summit of knowledge, was the son of a King, brought up in the lap of luxury. The suffering of humanity caused the band which covered his eyes to be withdrawn, and he saw the needs of his fellow men. He abandons his venerable father, his beautiful wife, leaves his palace, dresses himself in the rags of a beggar, and begins his work. After having imposed on himself the modification of the flesh, he obtained the knowledge of the ineffable law, which saves mankind and opens the doors of Nirvan.”

1. See, for instance: Indian Chronology, Aryan Origins and the Primeval Savage, The Early Races in the Popol Vuh, The Tide of Life, etc. Also related: Tales of the Ancient Rajputs, The Red Rajputs, The Heritage of the Brahmans, The Upanishads and the Brahmans, etc. [ED.] 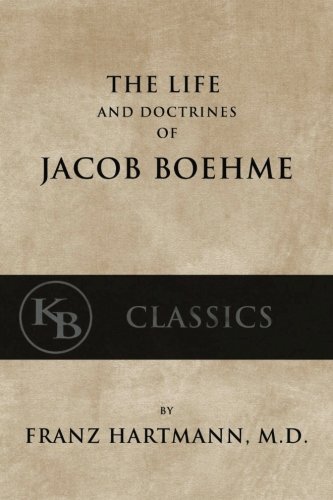 The Life and Doctrines of Jacob Boehme