Many people think that religion means a preparation for death or the states of the future. Religion really means a preparation for and a knowledge of life—a living of our life as it should be lived. That which prepares for death is life, and ever living. Formal religions do not even answer the question, why is death—nor any of the other burning questions in daily life. Why do we have suffering and sorrow? Why are we here? What was the origin of man? Why so many different conditions among mankind; why are some born to sorrow, and others to joy; why some in lowly places, some in high; why some with great faculties and others with very few and poor ones? Justice demands an answer which is not furnished by religion, with its “Creator”—for if man is the creature of a creator he can not help himself and is absolutely irresponsible. Any being, if “perfect,” would maintain justice; yet there are injustices among men. The caprice or whim of a creator does not explain the difficulty. Any being, however great or high, must of necessity be limited, finite, and imperfect—something outside us, something which does not contain the universe but is contained by it.

We have to go behind any idea of a Being, to the source of all being—to a basis common to the highest and to the lowest being. That basis and source is not to be found by looking outward at all, but is the very power to perceive, wherever there is life. Spirit, Life, Consciousness are the same in every being—undivided, however many and varied the perceptions. Evolution is not a compelling force from without, but the impelling force of Spirit from within, urging on to better and better expression. All advancement is from within. All the knowledge that we gain, all the experience that we obtain, is obtained and held within. Each one, then, is the Seer; all the rest are seen. So, the knowledge that we have to obtain is not information from without, not the thoughts of other men, but an understanding of our own essential nature, which represents every element in the great universe, from the basis of all life to every outward expression, and every possibility of further expression—just as each drop of water contains in itself everything existing in the great ocean from which it came. Nor does Law exist outside of us. Law is always inherent in Spirit; it is the action which brings re-action in every individual case, and to the collective mass of humanity. We are here under law and under justice. There is no such thing as injustice in the universe.

Knowing something as to our essential nature, knowing something of the purpose of life, and that life is all made up of learning, knowing that the universe is all alive, and that there is in reality no injustice save that which we inflict upon our selves by re-action, we would take an entirely different view of life and put these ideas into daily practice. We would take the position which most of all we need to take—that of our own responsibility, which religions have taught us to shift on to some God or devil. Recognizing that each one of us is from the same Source and going towards the same goal, though the path will vary with the pilgrim, we will act toward each one as if he were a part of ourselves. Like us, each one is moving onward—perhaps below us, possibly above. From the one above, we can obtain help. To the one below, we can give help. Such is the interdependence which should exist between all conscious beings; and under such a conception our civilization would not be as it is now. We should not find every man’s hand raised against every other man. We should not see those in poor case finding fault with the wrong conditions, but finding fault rather with their own wrong relations to others at some time when they abused the power they had. We should see each one trying to discipline himself, trying to bring himself into proper relation with all the rest—not so much outwardly, perhaps, as inwardly; for we may be sure that if we make clean the inside of the bowl, the outside will take care of itself. We have no greater duty to perform than to make clear and clean our natures—to make them true, to make them in accord with the great object of all life, the evolution of soul.

We can not wait to make our start in this direction until the nation wakes up to Theosophy; for the nation will itself awake only when each individual wakes up to that which is in himself and by his thought and action instills a similar thought and action in other human beings. Supposing each one determined to do all he could for every other one wherever he could, do you think that anybody would suffer? Not one! There would be more to help than those to suffer. But we are afraid that if we so act, the other man will not. So we do not move at all along that line. The majority of people are thinking about quite other things. They are busy at the shrine of their gods of comfort, seeking to get the best of everything in life at the expense of someone else. Or they are seeking to acquire “the power of will,” so that they can get something for nothing from someone else. That is the kind of “will” which is generally desired, its object being the getting of exactly what one pleases. Is not this psychic banditry? Anything gotten that way is taken from another, and we shall have to pay it back to the uttermost farthing—if not in this life, then in some other, for the scales of justice are unerring.

Do we not see that we can trust a universe that moves along unerringly under the law of perfect justice? ‘We certainly can. We can go forward with an absolute reliance on the law of our own spiritual being, knowing whatever conditions come are necessary for us, knowing that those very things we feel so hardly are object lessons for us because they indicate a wrong tendency or defect in us which this present distress affords us an opportunity to overcome, to strengthen our true character. That is all we have at the end of life, whatever of character—good, bad, or indifferent—we have acquired. Men spend their lives trying to avoid what they do not like, and trying to get what they like—what they can and while they can. Yet if they got all the wealth of the world, every possession and every possible desire, what good would it do them? At death everything would be left where they got it, because nothing adheres to Spirit. The idea of getting for themselves is one of the false notions which prevent men from understanding themselves as spiritual beings and using the power which belongs to them—for all powers of every kind—electrical, dynamic or explosive—come from the One Universal Spirit, and each man has latent in him all the powers in the universe. Physical life is not necessarily a vale of sorrow. The time must come when we shall have made man’s life on earth what it ought to be, when we shall have no fear of anything, when we shall not be afraid of our fellowmen. It was said of Daniel, when he entered the lions’ den, the beasts of prey did not touch him at all. Why? Because his heart was pure. He had no harm in it for anyone. He trusted to the spiritual law of his own being, and all nature makes obeisance to that. We could go out calmly, courageously, happily, relying on the laws of our own natures. If we did so, we would bring our daily lives in line with that nature; for there is nothing of our action which does not come from the mind, and back of the mind is the ‘motive we have in acting. Motive is what makes our actions really “good” or “bad.” If we are righteous in ourselves and desirous of doing right, then all that we do will flow rightly from us and every function will be a righteous function. All action springs from and is colored by the motive held in performing it.

Theosophy is the only philosophy that can be used in every direction in daily life. It can be used in all directions, high or low, because that use comes from an understanding of the Spirit itself, from acting for that Self and as that Self—for the Self acts only through the creatures. Acting for and as that Self in every direction, all else flows into line. All the destruction that is around us, all the misery that we see, has been brought about through our denial of the Holy Ghost—our denial of the Spirit within us. We deny it when we act as if we are our bodies, or our minds. THAT will not be denied. So man, meeting all the results of that denial and seeing them to be evil, learns that this is not the way. Then he seeks for Truth, and finding the truth, obtains all that he can desire—hope, happiness and a better understanding of his and all existence. It was to give to men all they could take in regard to the nature of the soul—that they might come out from this vale of sorrow—that those Beings known as Divine Incarnations have descended here of Their own will. They have carried forward from age to age this knowledge of nature and of man and of the purpose of life, learned through many civilizations of mankind. It is this knowledge which makes Them as gods to us in Their glory and power. 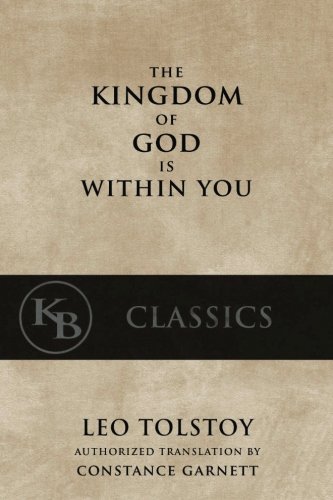 The Kingdom of God is Within You